The first batch of 2012 data from the LHC has started to be analysed ready for the ICHEP conference in three weeks time so it is no surprise that the first rumours about the Higgs data has surfaced. At NEW Peter Woit revealed his latest information that both ATLAS and CMS are seeing excesses in the diphoton channels at the same places where they saw them last year. The significance is said to be 4 sigma in each experiments for the combination of 2011 and 2012 data. Could this mean the Higgs Boson discovery has arrived? 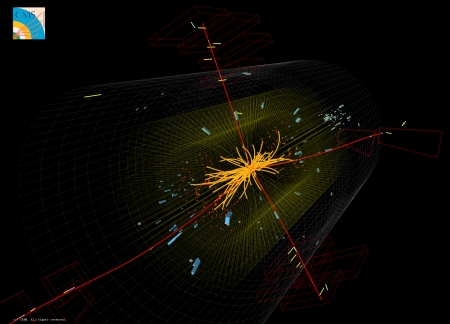 Remember that from last year’s data the local significance with diphotons was 3.1 sigma for CMS and 2.9 sigma for ATLAS. According to the mew rumour the total significance has risen to about 4 sigmas in both cases. This is not yet sufficient to claim a discovery for each experiment independently but the two results together could easily take the combined significance over the 5 sigma line that is required for discovery. Note that this would be the discovery of something consistent with a standard model Higgs boson. More work would be required to show that it has all the characteristics of the particle they were searching for. The total combined local significance across all channels might be expected to be even better but don’t forget that ATLAS had only 2.5-sigma for its combination, and CMS got 3.1 sigma, so even if the diphoton channel provides a discovery the combination may or may not reach 5 sigma depending on what happens in other channels.

Here is a bonus video about Peter Higgs

See also Dorigo at QDS who is not giving away what he knows as a member of the CMS collaboration but he points out that these levels of significance are about what is expected from the amount of luminosity provided.

See also an article on the collider blog questioning the practice of spreading these rumours. For what its worth, I agree that it would be better if no rumours emerged before the conference and I have resisted the temptation to reveal unapproved information from the experiments I have come across in the past whenever I knew it to be private, but once one blog has revealed something like this everyone will see it and follow-up postings like this one do not spread it any further.

This entry was posted on Sunday, June 17th, 2012 at 5:05 pm and is filed under Higgs Hunting, Large Hadron Collider. You can follow any responses to this entry through the RSS 2.0 feed. Both comments and pings are currently closed.